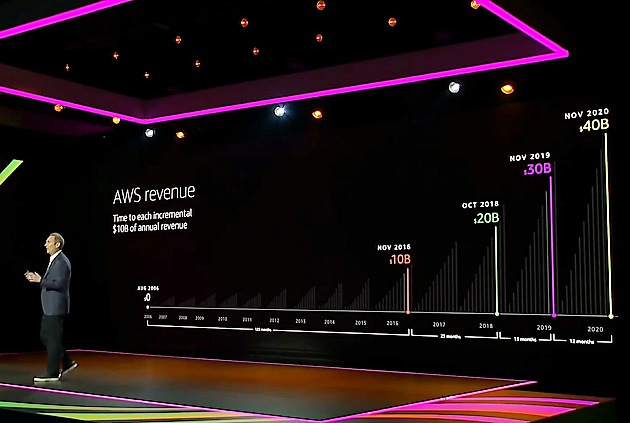 “It means that there’s a lot of growth ahead of us,” he said.

Re:invent is the biggest event of the year for AWS, where it unveils a dizzying array of new products and services and makes its case to developers and business decision-makers who might otherwise be swayed by the increasingly sophisticated cloud offerings from relative latecomers Microsoft, Google, Oracle and others.

Jassy, who is increasingly considered a potential successor to Amazon CEO Jeff Bezos, brought his mix of technical and business acumen to the virtual stage, while mostly sticking to his standard stump speech and sales pitch.

He did not acknowledge the AWS outage that impacted a large swath of the internet last week. Given that Amazon was piping in canned crowd noise for the virtual event, there was no chance of heckling on that point — not that it would be likely from the normal audience of AWS partners and customers anyway.

Nor did he seek to alleviate concerns about Amazon Web Services’ market power.

A recent U.S. House antitrust report said profits earned by AWS “enable Amazon to invest heavily in expanding its cloud operation, as well as to support its other lines of business.” It cited anonymous market participants expressing concern that Amazon “uses its high and steady profits from AWS to subsidize these other lines of business, including its retail operation.”

Internal Amazon documents provided to House investigators instruct employees to refer to this as a “myth,” the report said. And while AWS did lift Amazon to an overall profit at some points in the past, the rest of the company, including its e-commerce operations, has become increasingly profitable in its own right. 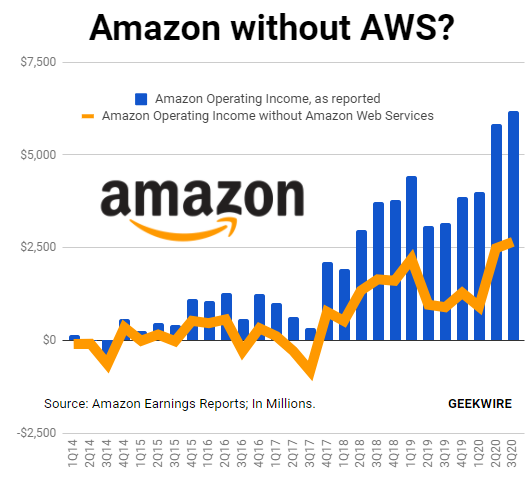 Discussing the state of the AWS business this week, Jassy did turn pragmatic at one point, noting that the pandemic has caused some companies to look closely at their short-term spending, trying to “save money any way that they can.”

One high-profile example is Airbnb, whose IPO filing shows that it renegotiated its AWS contract to give itself three additional years to reach its commitment of $1.2 billion in spending, as reported by Business Insider. Brian Olsavsky, Amazon’s finance chief, said during the company’s earnings call in October that customer cost-cutting was creating a “mixed bag” for AWS in the short run.

At the same time, Jassy said, the pandemic has caused many companies to take a step back and reconsider their long-term technology plans. As a result, he said, Amazon has seen many companies go from merely “dipping their toes in the water” and talking about moving to the cloud to actually putting a real plan in place.

When you look back on the history of the cloud, it will turn out that the pandemic accelerated adoption by several years.

“That, I think, is going to be one of the biggest changes you see,” Jassy said. “When you look back on the history of the cloud, it will turn out that the pandemic accelerated adoption by several years.”

Jassy went on to preach the importance of reinvention in business — presenting eight principles that, not coincidentally, would boost Amazon’s business even further if more companies were to adopt them. Among them: Use the platform with the most capabilities and broadest set of tools. Avoid complexity by choosing one key partner. Embrace risk, act with speed, and recognize that you can’t fight gravity.

“You’ve got to realize that if something’s going to happen, it is going to happen regardless of whether you want it to or not,” Jassy said. “You’re much better off cannibalizing yourself than having someone do it to you and chasing it.”

On that point, two of the more than two dozen announcements made during Jassy’s keynote suggested that he might be ready to follow his own advice.

Amazon announced new variations of its services for managing software containers, dubbed ECS Anywhere and EKS Anywhere, saying that customers would be able to run them in their own data centers in addition to “any infrastructure.” While the company didn’t exactly trumpet this fact, Protocol reported that “anywhere” does, in fact, include applications running on Microsoft Azure, Google Cloud and other competing cloud platforms.

Even this implicit acknowledgment of “multicloud” realities is something Amazon has been highly reluctant to do in the past.

“To me, this was really significant, because it’s really talking about the extension of AWS technologies outside of the AWS cloud,” said analyst Ed Anderson, a Gartner research vice president, in an interview with GeekWire this week. “That’s a pretty important message when you think about the need to manage applications, particularly container-based applications, in a hybrid environment, beyond just the the AWS cloud.”

This goes a step further than the existing AWS Outposts hybrid cloud service, which lets businesses run AWS services in their own data centers with the same hardware that Amazon uses. Anderson said he considers ECS Anywhere and EKS Anywhere a corollary to Google Anthos or Red Hat OpenShift, while Microsoft has taken a different approach with Azure Arc as a management agent.

Could this signal an increased willingness by Amazon to enable and perhaps even embrace scenarios beyond the AWS cloud? Only Amazon knows the answer to that, but customers are pointing the company in this direction, Anderson said.

“I will tell you that the use cases will increasingly demand this type of flexibility,” he said. “So if Amazon is really listening to their customers, it’s likely that they will get these signals, and we’ll see more of these types of extensions of that AWS cloud out to these other environments.”

Jassy also jabbed at Microsoft, without naming the company, in laying out his principles of reinvention: “If you look in the enterprise technology space, there are some providers who are competitor-focused,” he said. “They look at what their competitors are doing, and they try to fast-follow one of them. We have a competitor like that across the lake from us here in Washington.”

AWS re:Invent runs for three weeks this year as a free virtual event.