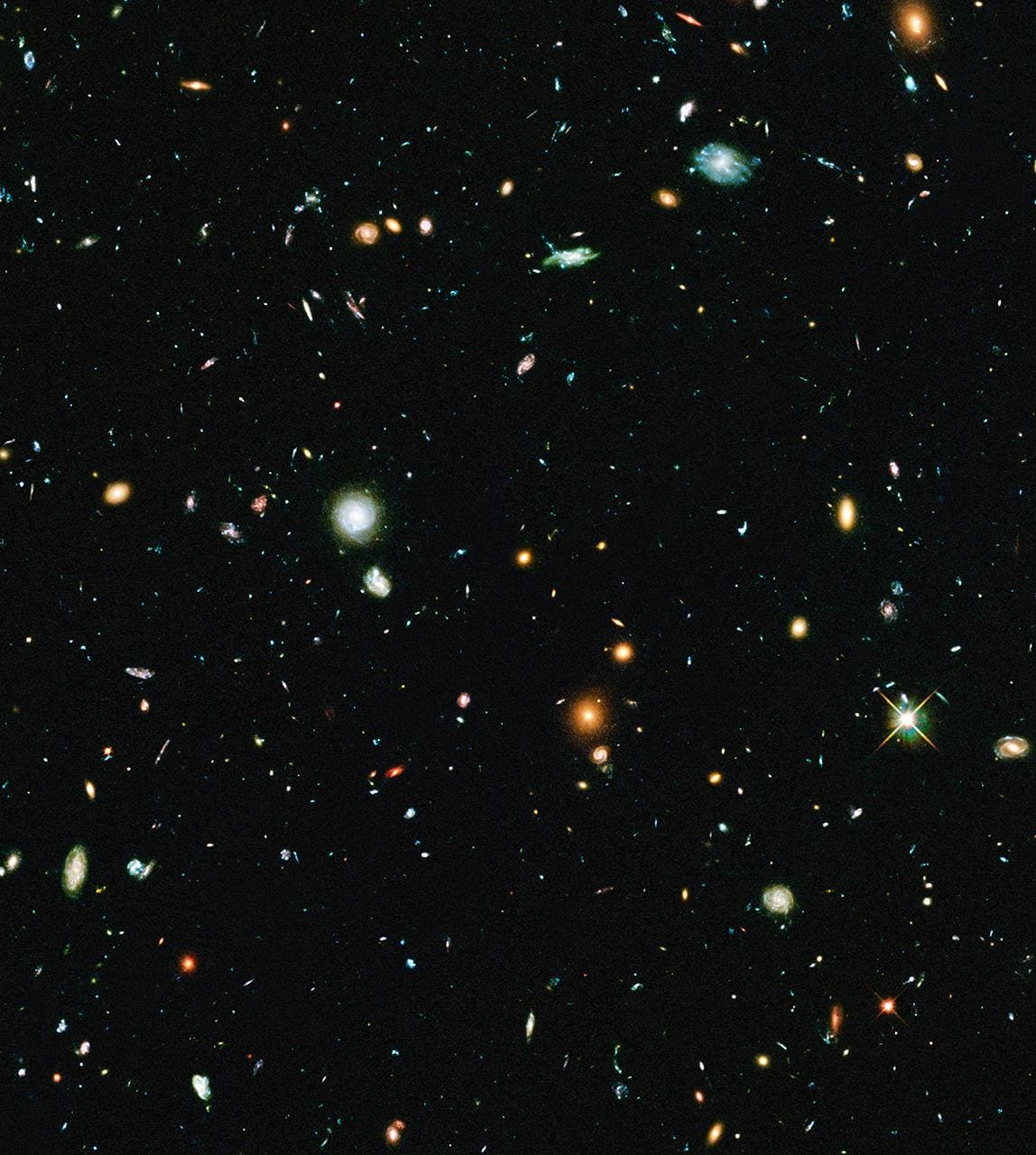 When we look out at the darkest night skies available on Earth, even the emptiest abyss we can find isn’t completely dark. We can look between the individual stars in the Milky Way, seeing out into the Universe beyond. We can look at the space between the myriad of galaxies populating the Universe, finding many regions without identifiable light sources of any type. But even when we do, the light from our own backyard still gets in our way.

From the Sun, the Earth, the Moon, and the tiny, light-reflecting dust grains found within our Solar System, even the greatest space telescopes of all must contend with this extraneous light from all directions: zodiacal light. From the individual atoms, ions, and molecules present within the Milky Way, a faint galactic glow always appears, as well. But if there were a way to subtract all these excess light sources away, would space appear completely dark, or would there be some light left over: a cosmic optical background? In a fascinating new study, a team from NASA’s New Horizons mission claims to have done this for the first time, claiming that deep space might not be entirely dark, after all. Here’s what they found.

When you think of the abyss of deep space, you probably think of the deepest images ever taken: images like the Hubble eXtreme Deep Field, which have revealed some of the faintest, farthest galaxies ever seen by humanity. These images were constructed brilliantly, by:

The crown jewel of this is the Hubble eXtreme Deep Field, with some cumulative ~23 days of observing time used to produce the final result. All told, this image covers a minuscule region of the sky: just about 1/30th of a degree on a side, meaning that roughly 32,000,000 of these regions would be required to cover the entire sky. But within this region, the observations revealed a total of 5,500 galaxies in this tiny region of space. Extrapolated over the entire sky, it leads to a straightforward estimate of around 170 billion galaxies in the entire Universe.

But there are two problems with that estimate.

In both of these ways, even Hubble is fundamentally limited.

The first limitation is easy to understand. When you open your eyes on the Universe, you’re going to collect light from everything that’s out there, one photon at a time. No matter how long you observe for, you’ll only collect a finite amount of light with your finite-sized mirror, fundamentally limiting how faint of an object you can see. You can find fainter objects if they’re closer, but even the brightest objects will no longer be visible if they’re too far away.

Hubble’s observations are biased towards intrinsically bright, nearby galaxies, making the smaller, fainter, and more distant ones more difficult to reveal. In theory, there should be more galaxies out there than even Hubble is capable of revealing; a recent study estimated that there might be as many as 2 trillion galaxies in the observable Universe, a factor of 10 greater than what Hubble has seen so far. Most of them would be faint and small, beyond the limits of what even the eXtreme Deep Field could reveal.

But the second limitation is one that most of us are far less familiar with. Most of us on Earth can only see a few hundred stars even on a dark, clear night, as the light pollution from our electrified infrastructure puts more light into the sky than all the objects visible in our night sky combined. This light, emitted from Earth’s surface into the atmosphere, makes it virtually impossible to see the fainter stars or any of the extended objects (like galaxies or nebulae) that would be visible from a darker location.

You might think that going to space would solve this problem, but it only saves you from the light pollution produced by Earth. In reality, there’s also the light pollution produced by our Solar System: zodiacal light. All throughout the Solar System, there are small amounts of diffuse, interplanetary dust. It plays a negligible role for most applications, but when you’re trying to observe the faintest things of all, this tiny amount of dust — and all the sunlight that it reflects — adds up to create a background of light that any observatory from Earth, even in the space around Earth, simply cannot ignore.

You can imagine lots of clever workarounds. You can imagine waiting until Hubble is deep inside Earth’s shadow cone, where the Sun is invisible, to take your observations. But the zodiacal light comes from well beyond the end of Earth’s shadow; this has little effect. You can look well out of the ecliptic plane, where the zodiacal light is dimmest; even so, the “background brightness” of the sky from this light is a factor of about 15 brighter than all the extragalactic light combined. If there are large numbers of faint, extended, distant objects out there in the Universe, Hubble will, in fact, miss them against this too-bright background of light.

And this is a problem, because there’s a key question we want to answer about the Universe: how much total light is there coming from beyond our own galaxy? And, if the answer is “more than the galaxies we’ve been able to measure so far,” then there are some follow-up questions: where is that light coming from, and is it confined to individual galaxies, or is some of it diffuse, coming from all directions in the sky?

If we remained in the same location in our Solar System, this would be an endeavor for speculation only. From our present position, we’re hopelessly embedded within this cloud of Solar System dust, which remains bright enough in all directions to prevent us from drawing strong, data-based conclusions about any sort of “cosmic optical background” (as opposed to the cosmic microwave background remaining from the Big Bang) that might be present. And this is unfortunate, because we know there ought to be more out there than what we’ve identified so far, and those light signals that should be there are swamped by the polluting effects of our Solar System’s own dust.

But one brilliant way we could approach this would be to travel far beyond the majority of our Solar System’s dust — beyond the planets, the asteroids, and out-of-the-plane of even the majority of the Kuiper belt — and measure the amount of background light that’s present, even after the contribution of zodiacal light becomes negligible. Although it’s outfitted only with an 8” (20 cm) camera, NASA’s New Horizons has just proven that they’re up to the task.

The new study, led by Tod Lauer, Mark Postman, and Hal Weaver but involving important contributions from the entire New Horizons team, was able to disentangle a whole slew of contributions, owing to a large suite of quality data taken at a variety of distances from the Sun, a variety of spacecraft orientations and conditions, and in a variety of directions. Camera noise, scattered sunlight, excess off-axis starlight, crystals from the spacecraft’s thrust, and other instrumental effects were all modeled and their contributions were removed. Observations too close to the Milky Way’s dust-rich plane were thrown out, and the remaining light was divided into six theoretical contributions:

Now, here’s where things get exciting. In 2016, the study that claimed there ought to be 2 trillion galaxies out there expected the total light produced by the entire Universe would be about 10 times greater than the galaxies we’ve seen so far would indicate. But that’s not what the New Horizons team saw; they only saw twice as much light as the known (and expected) galaxies would produce. This is reassuring, in a sense, as it brings two now-observed quantities closer in line with one another than we might have expected.

But where is that excess light coming from? Assuming that the New Horizons team didn’t make any major errors (including errors of omission) in analyzing their instruments and the various noise sources, three explanations remain in play.

What NASA’s New Horizons was able to do is remarkable: by looking at the full suite of data they’ve collected, they were able to conclude what the total amount of light is coming from the Universe beyond the Milky Way. The power in that light is minuscule — at just a few dozen nanowatts per square meter of space — but non-negligible. Despite all the stars and galaxies we expect to be out there, they can only account for about half of the total light that we now observe. There are definitely more light sources out there than we know of; what those sources are, however, remains a mystery.

In recent years, a number of independent teams have performed analyses that point towards faint, small, and distant galaxies contributing large amounts of light to the overall cosmic budget, perhaps twice as much as the known galaxies can account for. There are also constraints on how much of the extragalactic light can be diffuse and far away. As Edwin Hubble himself said, the history of astronomy is a history of receding horizons. With the next generation of observatories finally on their way, we might finally solve the cosmic mystery of where the light in the Universe actually comes from.