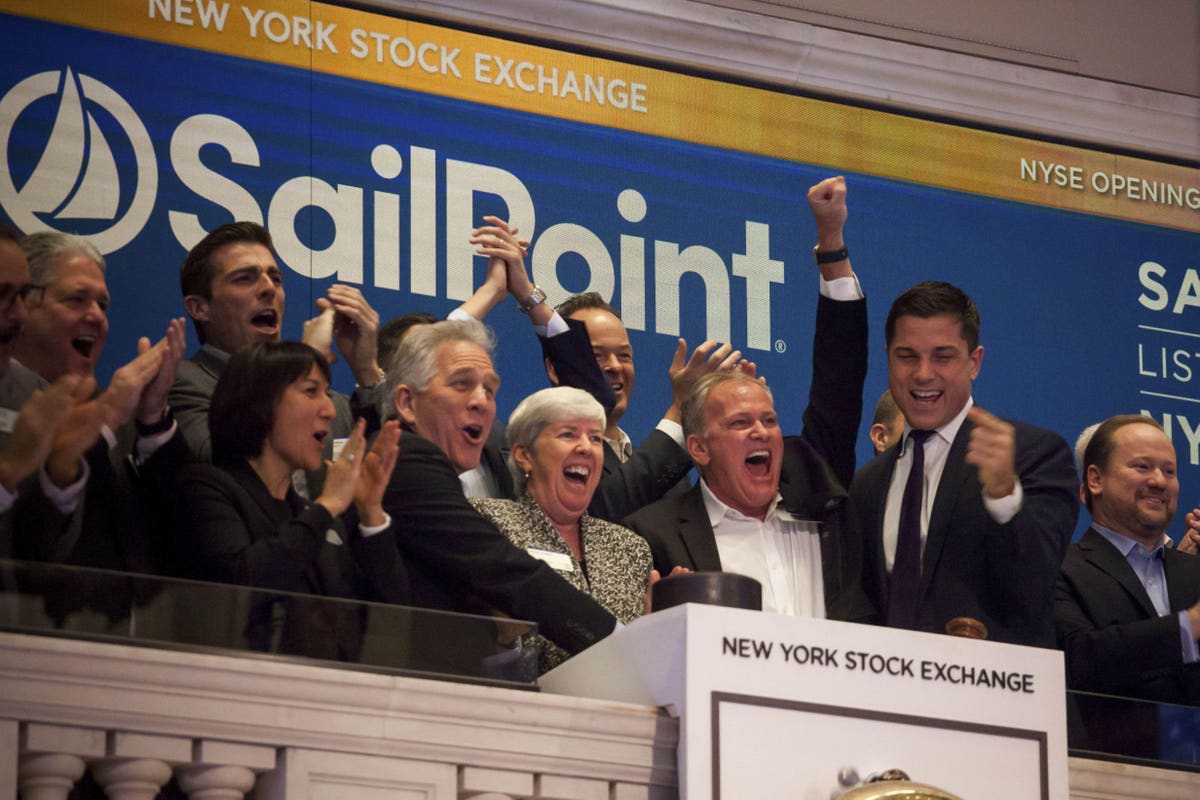 Since the pandemic began, more people have been working from home. When they access corporate systems, how can companies be sure that those workers are legit?

One answer is Identity Management — services aimed at making sure that only the right people can access specific corporate systems as their role within the company changes or they depart.

Austin, Tex.-based SailPoint Technologies is a leader in this market. However, SailPoint’s 24% revenue growth is dwarfed by that of El Segundo, Calif.–based Saviynt that — from what I’d guess is a smaller base (the company declined to disclose its revenues) — enjoyed 495% three year revenue growth.

Saviynt says it wins in 50% of its competitive face-offs against SailPoint — including American Express Global Business Travel which says it “transitioned” from SailPoint to Saviynt for reasons that ought to concern SailPoint investors.

Does this represent a threat to SailPoint’s growth? Could Saviynt be an attractive acquisition? SailPoint says it’s a much stronger company and there’s no love lost between the two. Meanwhile Saviynt aims to go public. Perhaps there is room enough for both companies in this market.

(I have no financial interest in the securities mentioned in this post).

SailPoint Is Racing Ahead

SailPoint — a leader in identity governance — is growing. Part of that is due to the strong industry demand. How so? “As firewalls cease to be effective, Identity is becoming the pillar around which enterprises are building IT security,” according to SeekingAlpha.

To maintain that leadership position, SailPoint offers a mixture of licenses for companies that run their own IT infrastructures (known as on-prem), software as a service (SaaS) subscriptions for companies that operate their computing in the cloud, and a mixture of the two for customers with so-called hybrid environments — blending on-premise and cloud-based computing.

SailPoint — whose stock is up 93% for the year as of December 2 — exceeded expectations in the third quarter and hiked guidance.

SailPoint’s $94 million in revenue — was about $10 million more than analysts expected. Subscriptions rose 36% while licenses increased 15%. SailPoint’s earnings per share (EPS) hit $0.11 — far better than the consensus EPS estimate of negative $0.05, according to SeekingAlpha.

SailPoint’s guidance for the fourth quarter also increased. For the December-ending quarter, SailPoint hiked its forecast about $1.5 million above the consensus to a range between $93 million to $95 million. SailPoint guided SaaS revenue up 31% to 32% to a range from $53 million to 53.5 million.

CEO Mark McClain told me November 30 that he is bullish about SailPoint. As he said, “Throughout 2020 as the pandemic impacted organizations of all shapes and sizes, even companies in the industries hit hardest (airlines, healthcare, and retailers) turned to SailPoint. Covid-19 became the best use case to showcase why identity security is business essential today.”

He said that SailPoint helped its customers manage the rapid shift to work from home (WFH). “The companies who effectively and quickly managed the quick shift to virtual working were those who put identity security at the foundation of their business. Their shift was seamless thanks to SailPoint – as many customers told us — we helped them to move their business forward both efficiently and securely during their greatest time of need,” noted McClain.

SailPoint faces many rivals in this market. One of them is Saviynt which says it has enjoyed three -year revenue growth of 495% “driven in large part by winning more than 50% of head-to-head deals against incumbents like SailPoint and Ping Identity,” according to my November 23 interview with CEO Amit Saha.

Echoing McClain, Saviynt says it has helped customers such as Walgreens, Equifax, and Hormel Foods and others make the switch to WFH “efficiently and securely.” Moreover, the company has “540 employees in seven countries and over 200 large customers,” Saha said.

Saviynt — founded in January 2010 — has been growing fast thanks to an early switch to a cloud-based business model. “Between 2010 and 2013, we were in stealth mode — building the technology and doing consulting. In 2013, we pivoted from on-prem to the cloud. The solution is available on demand and can scale as the organization evolves,” said Saha.

Saha is aiming the company at a large opportunity that combines identity and privileged access management. As he said, “Our total addressable market is over $20 billion growing at 35% to 40% a year. That includes the $12 billion identity management and governance market and the $7 billion to $10 billion privileged access market [which protects the accounts of corporate administrators with full control of a company’s computing resources and applications.]”

Saviynt is “well-capitalized” having raised a $40 million Series A in 2018. Its growth rate remains rapid but seems to be slowing down. As Saha said, “We have grown at a 76% CAGR over the last five years — with 35% year on year growth.”

Saviynt targets larger enterprise customers rather than Small and Medium Sized Business (SMBs). As Saha said, “Unlike a typical SaaS company like Okta
that focuses on the SMB market, [we target] Fortune 1000 companies that need more customer support than SMBs. We invested in operations and we offer more products. The size of the companies we sell to has increased 50% in the last two years.”

Saviynt says its product mix and approach to innovation give it an edge over rivals. As Saha said, “Compared to CyberArk, we have a new take on privileged access — [offering] access management on top of identity management. Unlike SailPoint, we do not acquire to get new products. Our products are more tightly coupled since they are built from the ground up on one platform.”

SailPoint does not agree with Saha. As McClain told me, “While we see [Saviynt] show up with some frequency, we have a very high and consistent win rate against them. That’s why we are many, many times larger than they are while only a few years older. To be clear, what they do and what we do are very different. They are small start-up focused on highly customized, hosted identity solutions that do not scale, nor does their approach set their customers up for success.”

Saviynt says that its customers are highly loyal and they keep buying more from the company over time. “Saviynt’s net customer retention rate (CRR) is 98.6%. Based on upsell and cross-sell of new subscription licenses to existing customers, [our] CRR grows to 136% because customers want to leverage more of Saviynt products,” Saha explained.

One enterprise — American Express Global Business Travel (AEGBT) — prefers Saviynt over SailPoint. As AEGBT scaled down its organization in the wake of the pandemic, it concluded that Saviynt’s lower cost, ease of use, innovativeness, and excellent customer service was preferable to its experience with the company’s previous supplier, SailPoint.

AEGBT began transitioning to Saviynt in 2019, when its current Chief Information Security Officer (CISO), David Levin joined the company. As he explained at a recent Saviynt customer conference, the pandemic led to a drop in demand for travel which caused AEGBT to reduce headcount. Levin had a very small staff to handle the large number of requests to change access to its computing resources for employees who departed and others.

Levin struggled with the SailPoint system he inherited as CISO. As he said, “There was no cloud, nor privileged access. SailPoint was a mature product and was using a third party to manage it. [AEGBT] was ripe for using a SaaS-based platform to replace the high cost, siloed application.”

Levin saw the downtime as an opportunity to adopt a better solution for access governance. He was looking for a service that improved the user experience “brought siloes under one roof,” was cloud first, less complex, highly secure, automated, quicker to deploy, and enabled flexible onboarding and offboarding.

In addition, AEGBT wanted to rid itself of “boat anchors.” Levin said, “SailPoint was on prem — meaning a high cost to manage. It was not easy to deploy in house and it required hard-to-find, expensive partner expertise. It was short on innovation, speed, and relationship management.”

Given pressure to cut costs quickly while complying with regulations, Levin was in a hurry to make a change.

Saviynt fit the bill for AEGBT. As Levin said, “[Saviynt] is a very simple platform to own and manage; its sales and product teams were open to resolving our problems, it is cloud-first and cloud-ready from a SaaS perspective. The user experience blows everyone else out of water. I have seen the next releases and I am excited about them.”

SailPoint declined to comment on what happened with its AEGBT contract. McClain said, “We do not comment on behalf of our customers unless specifically approved by them. What I can [say is] we have dozens of examples of customers who switched from Saviynt to SailPoint. In the very few instances where a customer has chosen Saviynt over SailPoint, they have quickly realized their error and turned to us to right the ship, recognizing that we’re a company built with the best technology approach combined with their best interests in mind, full stop.”

A recent Gartner survey gives the edge to SailPoint. According to Gartner’s peer insights report on Competitors and Alternatives to SailPoint in Identity Governance and Administration for recent customers, SailPoint’s overall user rating is 4.5 out of 5 and 87% of customers surveyed would recommend it. The comparable figures for Saviynt are 4.1 and 76%.

Saviynt does not seem afraid of SailPoint and anticipates an IPO. “Going public is top of mind. We are confident about our customer and the market opportunity that needs to be addressed. We have the ability to keep our customers satisfied and can support our growth,” said Saha.

If the IPO doesn’t work out, I would not bet on SailPoint acquiring Saviynt.