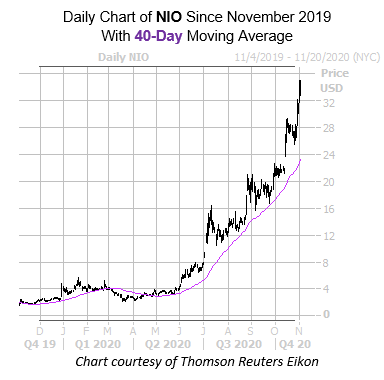 The shares of Nio Inc (NYSE:NIO) are up 4.7% to trade at $34.88 at last check, and earlier hit an all-time high of $35.28. And while the Tesla (TSLA) competitor is already enjoying an astounding 1,936.8% lead year-over-year lead — with support from the 40-day moving average for the past several months — a historic bullish signal now flashing suggests even more upside may be in store for NIO in the coming weeks.

More specifically, the stock’s recent peak comes amid historically low implied volatility (IV), which has been a bullish combination for the equity in the past. According to data from Schaeffer’s Senior Quantitative Analyst Rocky White, there have only been two other times in the past five years when the stock was trading within 2% of a 52-week high, while its Schaeffer’s Volatility Index (SVI) sat in the 20th percentile of its annual range or lower — as is the case with NIO’s current SVI of 50.2%, which sits at the lowest possible percentage of its 12-month range. Data shows the stock was higher a month later, averaging a return of 26% for that time period. From its current perch, a move of similar magnitude would put NIO just shy of the $44 mark — at yet another record peak.

Analysts are hesitant toward the security, with five of the seven in coverage sporting a tepid “hold” rating, and the remaining two carrying a “strong buy.” Meanwhile, the 12-month consensus target price of $20.63 is a whopping 40.8% discount to current levels. This leaves plenty of room for upgrades and/or price-target hikes moving forward, which could push the security even higher.

Digging deeper, shorts are already hitting the exits, though there is still plenty of pessimism to be unwound. Shor interest is down 9.7% in the most recent reporting period, but the 60.87 million shares sold short still account for a substantial 7.9% of the stock’s available float.