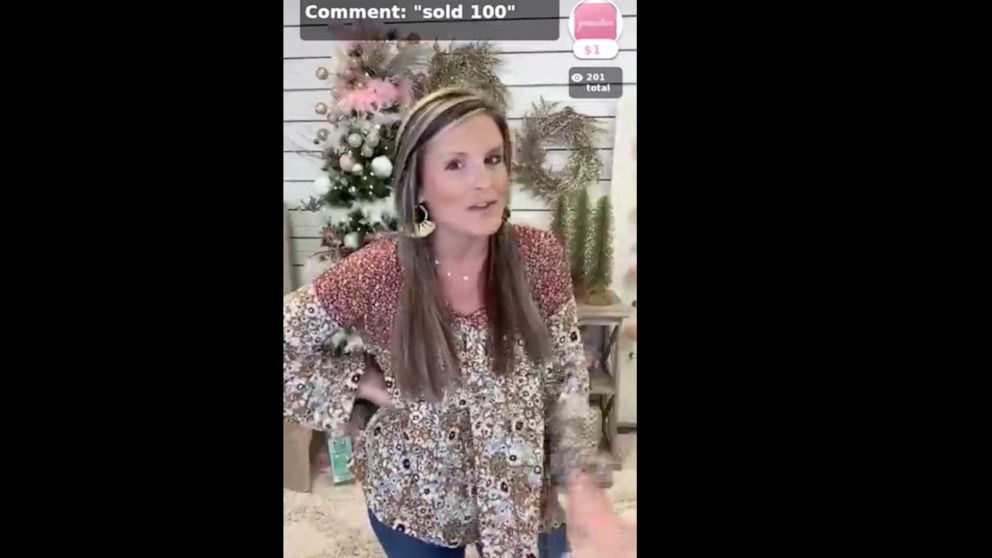 NEW YORK — When Jenna Powell gets in front of a camera, she can sell $10,000 worth of sparkly dresses and tie-dye hoodies in 40 minutes.

Powell, whose three Jennaration shops in Alabama were closed at the start of the pandemic, has put all her focus on selling through live videos, broadcasting live several times a week to 400 people who watch on Facebook or her store’s app. She puts on clothes from her shop, spins for the camera and tries to get viewers to buy.

“This top is a deal for $22!,” Powell says in a recent video about a leopard print sweater she’s wearing. “It’s just very, very well made, y’all!”

Livestream selling, already popular in China, is taking off in the U.S., ushering in a new way for Americans to shop online. Instead of searching for what they want, they pick up their phones, sit back, and click to buy if they like what they see.

This way of shopping is expected to ring up nearly $5 billion in sales this year, and reach $25 billion in 2023, according to retail data firm Coresight Research.

The pandemic is helping to fuel the boom. Business owners with closed stores have taken to livestreaming to sell animal print tops, heated eyelash curlers and just about anything else. They have a captive audience: Many Americans stuck at home with nowhere to go are looking for something to watch. At the same time, tech companies, including Facebook, Instagram and Amazon, have made it easy for businesses to livestream from their smartphones.

No one would confuse these videos for the more polished programing on home shopping channels QVC or HSN. Cameras fall. Sometimes the video is upside down. And the WiFi crashes. But Powell, who livestreams from Jennaration’s 5,500-square-foot warehouse, says people tune in because her videos are relatable, like when her son shows up and makes faces at the camera.

“It’s real life. It’s not like looking at a Victoria’s Secret catalog. I’m a real person,” says Powell, whose livestreams helped her 7-year-old business nail its best-selling month in April, even though her stores were shut.

She plans to go live Thanksgiving night, hoping to catch the attention of bargain hunters who have to stay home after their turkey meals because Walmart, Target and other major stores won’t be holding in-store doorbuster sales that night for the first time in years. “Those people still want to shop,” she says.

CommentSold, which makes the software that Jennaration and more than 4,000 other stores use to livestream, expects users to sell $1 billion worth of goods this year, more than triple last year. Most of the shoppers tend to be women over the age of 35, who chat with each other in the comments about which outfits they like or what they want to buy.

“It’s like going on a shopping trip together,” says CommentSold founder Brandon Kruse.

LaKesha Williamson says she watches about 30 hours of live sales a month, spending about $50 a week on tops, jewelry or smartphone chargers.

“That’s the only way I shop now,” says the 42-year-old from Calera, Alabama, who works at a domestic violence shelter.

The videos let her see how clothing fits on real people. She also likes that the hosts call out her name when she asks questions or comments on an outfit.

“It’s like having a conversation with somebody on TV,” Williamson says.

Dan Hodges, CEO of retail advisory firm Consumers in Motion, thinks livestreaming will transform online shopping because it adds a human touch missing from e-commerce: a live person who can answer questions and make recommendations.

He envisions a future where department stores will launch their own livestreaming channels, featuring workers from the beauty counter or the shoe department, giving shoppers tips and fashion advice without having to walk into a store.

Online shopping giant Amazon has been experimenting with livestreaming for five years, but last year it offered a free app allowing businesses that sell goods on the site to livestream from their smartphones. Shoppers can ask questions in a chat box, and the products that the hosts are talking about show up near the video, making it easy click to buy. During its two-day Prime Day sales event last month, Amazon says it aired 1,200 livestreams.

Beauty brand Chella started livestreaming on Amazon about a year ago, showing shoppers how to use its eyebrow gels, heated eyelash curlers and mascaras. The average video gets about 3,000 views, which Chella says is a big audience for a small brand.

Kayla Parks, who works at Chella and hosts the Amazon livestreams, has noticed viewers have gotten chattier during the pandemic, complementing her nail polish or asking which eyeliner color matches their hair color. She thinks its either because it’s harder to speak to workers at makeup stores, or, they’re just lonely.

“Maybe they want someone to talk to,” says Parks. “They don’t always feel like they’re being sold to. It’s like you’re talking to your friends.”