“On TV And Video” is a column exploring opportunities and challenges in advanced TV and video. Today’s column is written by Brian Ejsmont, VP of product management at VideoAmp. Recently, there’s been a lot of industry chatter from companies claiming they can reduce the latency of cross-channel reporting across attribution use […] 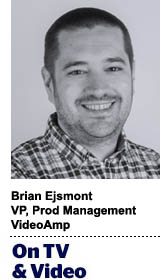 “On TV And Video” is a column exploring opportunities and challenges in advanced TV and video.

Today’s column is written by Brian Ejsmont, VP of product management at VideoAmp.

Recently, there’s been a lot of industry chatter from companies claiming they can reduce the latency of cross-channel reporting across attribution use cases, AKA “fast-twitch” reporting, enabling quicker in-flight decision making using delivery data. They offer this approach in lieu of something more traditional, such as relying on heuristic models or simply waiting to apply current learnings to the next campaign.

As a resource and source of truth for clients making media decisions, it’s important for the industry to understand what “fast-twitch” means, how it’s actually done, and what the potential drawbacks are. Does this term actually exist in the capacity that it’s marketed? If it does, can it ensure the same accuracy as historic models?

For many ad tech providers, in-flight optimization is at the forefront of platform development. They build systems that update daily based on the most up-to-date media delivery and attribution event data available. Although this sounds fairly simple, nothing in ad tech actually is and the problem lies in the inherent latency in TV data, specifically cross-screen campaign data, as expressed below. These delays in receiving source data are in place to ensure reasonably accurate data across all devices and screens, thereby enabling customers to make more accurate decisions:

The delay in linear viewership data is the biggest impediment to reducing further latency. However, simply using a Smart TV ACR-only panel, or an STB-only panel for viewership measurement means a significant sacrifice in terms of accuracy.

The Coalition for Innovative Media Measurement recently highlighted this problem in its study, “Getting Attribution Right,” which uncovered that methodology, rather than technology, is the key differentiator in viewership data accuracy.

Commingling ACR and STB data sets causes the eight-day delay, due to the slower delivery of STB data from MVPDs along with the application of the correction and modeling based on the unique facets of each data set. Meanwhile, the ACR-only data becomes stable within two days including modeling and skew correction. Which begs the question: Are we, as measurement providers, measured against speed or accuracy?

Measurement providers who claim “fast-twitch” in market usually use either ACR or STB data sets to circumvent the latency required by commingling data. But data validation and comparing the use of one data set vs. two reveal a glaring discrepancy: ad ratings and impressions can come in at as little as 40% of what’s observed when using commingled Smart TV ACR and STB data.

ACR data alone for TV measurement does not account for full household viewership. According to the US Energy Information Administration, US households own an average of 2.3-2.6 televisions . STB data shows a similar number, as pay TV households typically have pay TV service available on all their sets. But most households have a mix of different TV brands, and many TV OEMs do not even make their ACR data available. Therefore, an ACR panel, even comprised of data from multiple ACR providers, includes an average of only 1.03 televisions per household.

So how are measurement providers making the ACR-only panel usable for fast-twitch measurement?

The most obvious solution is to use a multiple of a constant – say 2.5 –  to scale up viewership to represent the whole household. While this method might produce results of similar magnitude for ratings and impressions, it also assumes that every television in the household consumes the same content, which intuitively does not make sense. This method also assumes no inherent bias toward the type of content being consumed on these ACR-enabled TVs. ACR-enabled TVs tend to have large screens and high definition displays, perfect for watching movies and live sports in the living room with family and friends in the evenings.

We actually see this phenomenon in the data. Comparing public smart TV ACR data from Inscape for the week of July 20-26 2020 with a commingled data set, the Inscape-only data over-attributes viewership share to live sports and broadcast networks while under-representing viewership in news, reality, and children’s programming. This discrepancy supports the theory that ACR-enabled televisions are usually in more communal rooms, where people consume content best viewed on large, high definition screens. Secondary viewing in bedrooms, playrooms, and offices along with the viewership of those who don’t require a high tech television experience is better captured through the STB data.

In the future, “fast-twitch” TV measurement may not be totally out of the realm of feasibility for vendors who use the unique qualities of Smart TV ACR and STB data sets to solve for the latency problem. For now, accurate “fast-twitch” cross-channel measurement simply does not exist, and advertisers should be wary of anyone who makes such claims.

Bloodborne Isn't 60FPS On PS5, But Some Other FromSoftware Titles Are

Mon Nov 9 , 2020
Bloodborne is one of the PS4’s most important games for many players, and there’s been a lot of speculation on how it might be improved on PS5, as many titles will be. We can now confirm that–at launch, at least–the title does not receive a significant framerate improvement. However, some […]