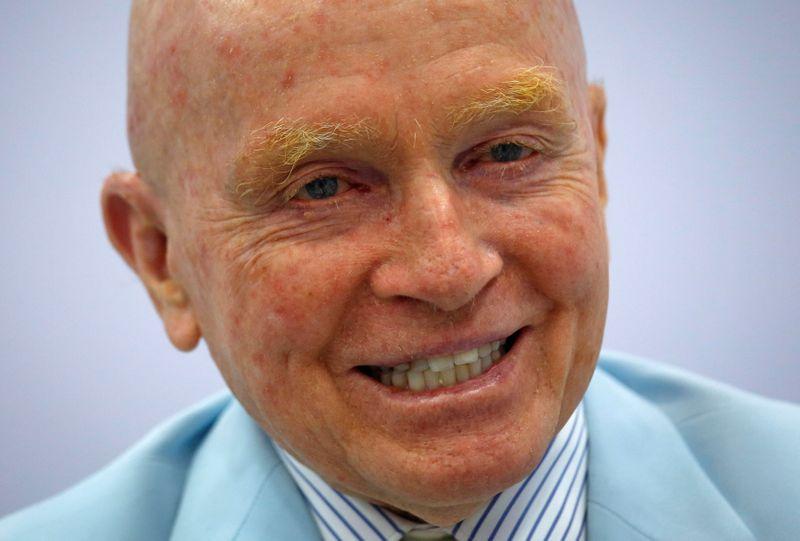 Governments in developed countries won’t be able to continue supporting economies as they have in 2020, the founder of Mobius Capital Partners, told the Reuters Global Markets Forum from Dubai.

“India and China are the big ones for us now, but a lot of these other countries like South Korea and Taiwan are very significant; and then if you go to Turkey and South Africa, prospects are

(Bloomberg) — Global stock markets are on the cusp of finishing a record-breaking month sparked by major progress toward a coronavirus vaccine.

Trading was muted on Monday, with European stocks holding steady and U.S. futures slightly lower. The MSCI World Index has soared 13% in November, the best performance on record.

“I suspect that investors have become cautious after big gains in the last few weeks that were driven by the vaccine news,” said Peter Rosenstreich, head of market strategy at Swissquote Bank. “It’s a big positive as it’s really provided an endgame for Covid-19.”

Over the weekend, U.S. Surgeon General Jerome Adams said the federal government hopes to quickly review and approve requests from two drugmakers for emergency approval of their Covid-19 vaccines.

The rapid pace to a vaccine has given investors

BASINGSTOKE, England–(Business Wire)–A new study from Juniper Research has found that the total number of mobile money users in emerging markets will exceed 1.2 billion in 2025, up from 980 million in 2020; equating to just under 30% of all mobile phone users across emerging markets.

The report predicts that domestic P2P and payments to merchants will be increasingly popular in mobile money schemes and will drive growth. The research recommends that mobile money providers agree partnerships with banks and other financial institutions, so as to increase the sophistication of the products they offer, in order to take advantage of increasing financial and technological literacy.

It’s been a tough decade to be an emerging-markets investor, as this sector has underperformed the S&P 500 since 2010.

But market watchers say after 10 years of lagging the U.S., emerging markets may finally be ready for prime time as valuations and a rebounding global economy could help the sector.

Marcelo Carvalho, head of global emerging market research at BNP Paribas, says although emerging markets still face several risks in the coming months, 2021 could be “a sweet spot” for these countries.

BNP Paribas, along with several other economic forecasters, say much of their 2021 outlook is based on effective and safe vaccines. So far several companies, including Pfizer, Moderna and AstraZeneca have announced 90%-plus efficacy in late-stage vaccine trials. It’s a sentiment that’s lifting all markets, including emerging markets, says Pat O’Hare, chief market analyst at Briefing.com.

“There’s welling up of expectations that you’re

If you have not already done so, I would recommend checking out Canterbury’s video that was posted last week.  It is a powerful update that provides a lot of context to today’s market structure:

Throughout many updates in this year, we have talked about the weakness of certain asset classes in comparison to large cap stocks (the S&P 500 is an index composed of large cap stocks).  In this update, we will take an opposite approach and say that many segments of the markets, that have previously lagged, are now gaining relative strength over large cap equities.

Small cap stocks, such as the components of an index like the Russell 2000, have certainly felt the impacts of the Coronavirus market panic more than most other equities. While the S&P 500 fell by -34% from peak to trough back in March, small cap equities saw a larger

OKO provides effective, affordable crop insurance to farmers in emerging markets by using new technologies in satellite imagery and weather forecasting to simplify and automate the claim management process, making crop insurance accessible to thousands of smallholder farms. Serving the agricultural community across Africa, OKO was using SMS to communicate and engage with farmers for purchasing crop insurance and sharing valuable information, such as weather updates, to minimise crop damage. However, SMS communication was often limited and ineffective due to the low literacy rate of farmers.

Emerging markets have rallied this year, even keeping pace with the S&P 500 since the March low.

Why this investor advises portfolios should be exposed to China

From that March 23 bottom, the EEM emerging markets ETF and S&P 500 have rebounded more than 63%.

The group’s next move depends on the U.S. dollar, according to Matt Maley, chief market strategist at Miller Tabak.

“The DXY Dollar Index, even though it was selling off for quite a while, it actually stabilized a little bit the last four months, and it’s bounced off the $92 level four or five different times,” Maley told CNBC’s “Trading Nation” on Monday. “If you see a breakdown in the dollar below that $92 level, that’s going to help the small outperformance the emerging markets we’ve seen over the last six, eight months become much bigger.”

Likely aided in large part by the results of the recent U.S. presidential election, the widely followed MSCI Emerging Markets Index is higher by 6.54% over the past month.

That index is up 9.31% year-to-date and appears poised for a double-digit annual gain for a second consecutive year, but that’s not the only reason risk-tolerant traders may want to acknowledge the Direxion Daily MSCI Emerging Markets Bull 3X Shares (NYSE: EDC) before 2021 arrives.

EDC attempts to deliver triple the daily returns of the aforementioned MSCI Emerging Markets Index and is higher by almost 20% over the past month.

EDC has credibility as a near-term bet because of momentum accrued on the back of market participants viewing the incoming Biden Administration as more hospitable toward China. By the way, the world’s second-largest economy and by far the largest geographic weight in the index