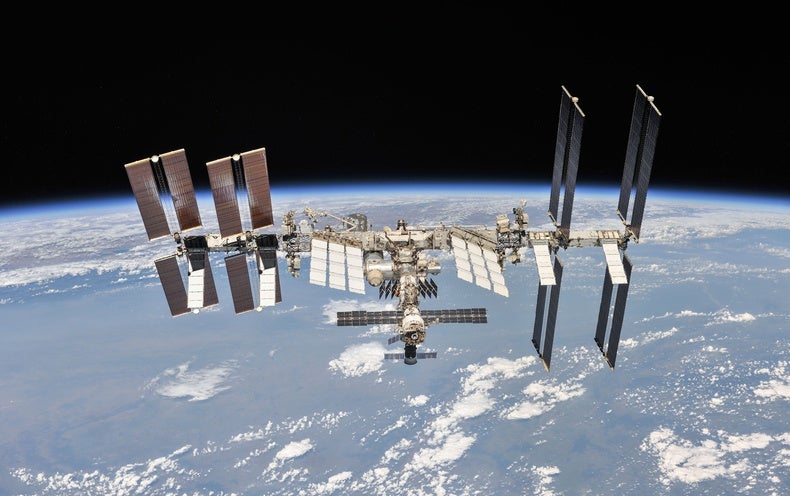 What goes up must come down—including, sadly enough, the International Space Station.

For precisely 20 years now, the massive orbiting laboratory has constantly been home to humans, the lucky handful of Earthlings who at any given time venture into the topsy-turvy world of microgravity. But like the rest of us, the International Space Station is aging. And it can’t stay in orbit on its own indefinitely—it needs a regular boost or fuel injection from visiting spacecraft. If those boosts stop or something else goes wrong, sooner or later, the lab will fall.

“Basically, any cargo ship that comes to the space station, or indeed any ferry ship, usually has surplus propellant to a certain degree,” Jonathan McDowell, an astronomer at Harvard who specializes in tracking objects in and falling out of orbit, told Space.com. “They have to have propellant to do the rendezvous, and then they can sometimes have extra to do a reboost.”

For now, those flights will continue through at least 2024. And because of the station’s international nature—it’s a partnership among the United States, Russia, Canada, Japan and the participating nations of the European Space Agency—the decision to retire it will always be based on both engineering and politics.

“While ISS is currently approved to operate through at least December 2024 by the international partner governments, from a technical standpoint, we have cleared ISS to fly until the end of 2028,” NASA officials wrote in a statement to Space.com. “Additionally, our analysis has not identified any issues that would preclude us from extending beyond 2028 if needed.”

But some day, the station’s time will come. The facility is aging and at constant risk of impacts from space debris and micrometeorites. If humans don’t retire it, eventually the hazards of space will.

The eventual fate of the space station has always been a specter for NASA and Roscosmos, Russia’s federal space agency, but as time has passed, it has loomed larger on the minds of space experts.

“‘Oh, we’ll bring it down eventually,’ the idea has always been; ‘We commit to deorbiting it.’ But my sense is that they didn’t actually think through the details until about five years ago,” McDowell said. “Until then it was like, ‘La la la, it’s in orbit, we’re still building it, we’re not going to worry about how to get rid of it.’ Which maybe isn’t quite the way you should do things.”

One major voice in changing that has been NASA’s Aerospace Safety Advisory Panel, a group that evaluates the safety measures NASA is taking in spaceflight. The panel has been raising concerns for at least a decade about how the space station will end, spurred by the then-upcoming retirement of NASA’s space shuttle vehicles, which could have been used to deorbit the International Space Station.

The group is still citing the issue regularly in its analyses of NASA policies.

“The panel continues to track the open work status on the planned deorbit strategy for ISS and the fine-tuning of some wording in the related space station program document,” David West, a member of the panel, said during the group’s quarterly meeting, which was held virtually on Oct. 1. “We will continue to monitor the progress of getting agreement on the strategy by all parties.”

Scenarios for both a scheduled space station deorbit and a response if something goes very wrong are in the works, NASA confirmed, but are not yet public. “NASA is actively working with the entire International Space Station partnership on plans to safely deorbit the space station at the end of its lifetime,” NASA officials wrote in a statement to Space.com.

Decades in the making

Planning the space station began in the 1980s, and while today the concept of a massive orbiting laboratory is unremarkable, at the time it was unprecedented.

“No one had any idea how to build something like this when we started out on the ISS,” Christian Maender, director of in-space manufacturing and research for Houston-based company Axiom, which is planning on building its own space station by jumping off the International Space Station, told Space.com. “We built the largest peacetime engineering project ever, and by building pieces of an overall spacecraft that never actually saw each other or touched each other until they got to orbit.”

All told, space station construction required 42 separate launches. The facility would weigh over 900,000 lbs. (420,000 kilograms) on Earth, is nearly the length of a football field and boasts as much livable volume as a six-bedroom house, according to NASA.

The station’s demise didn’t go completely unconsidered as the facility was being designed. Just a few years earlier, in 1979, NASA’s Skylab station fell out of orbit. The agency had planned to guide the facility down to a controlled destruction in Earth’s atmosphere using an early flight of the space shuttle. But that vehicle was delayed, leaving the 80-ton Skylab stranded even as solar activity picked up, warmed and expanded Earth’s atmosphere, and thereby accelerated the facility’s doom.

As a result, the spacecraft fell on its own, out of control, leaving no way for NASA to target the pieces over remote areas or slow the spacecraft’s descent enough to reduce the size of those pieces. Instead, chunks of the station scattered across Australia, the largest of them a massive oxygen tank. The incident was a turning point in how people think about how large objects leave orbit.

“In the early days of the space age, no one worried about it. Big thing falling out of the sky, no big whoop,” McDowell said. “People have gotten more and more risk-averse over the years.” And the longer spaceflight continues, the more experts worry about abandoned orbital debris, particularly the largest of it.

The risk if the space station does fall to Earth on its own is significant, McDowell argued. At about 400 tons, the space station is by far the heaviest human-made object ever to circle Earth. The larger an object is, the less likely the atmosphere is to be able to fully burn it up. And because of  the space station’s outstretched solar arrays, it’s vulnerable to spinning out of control, at which point rescue options would be limited, McDowell said.

No matter what led to an uncontrolled entry, the results would not be pretty, he said, although not nuclear-catastrophe-level grim. It would be more like a plane crash, although with debris spread over a much broader area. “Worst, worst case, I guess it’s a 9/11, right?,” McDowell said. “Because it’s at worst case a plane crashing, part of which is in a populated area. And that’s bad. But it’s not asteroid-hit bad.”

How to destroy a space station (safely!)

So how to control the space station’s reentry?

A group of engineers from NASA and Roscosmos presented a paper evaluating some disposal options at the 2017 International Astronautical Congress. Their work is based on deorbit procedures conducted on the Russian space station Mir in 2001; the International Space Station is about three times heavier.

But the gist of the plan mirrors how the space station retains its altitude during normal operations. Most commonly, a Russian Progress cargo vehicle will either conduct a burn while docked to the station or transfer fuel into the main service module’s thrusters to fuel the station’s own burn; either way, the station climbs.

In a controlled deorbit, Progress vehicles would do the same thing but in the reverse direction, lowering the station’s lowest altitude. Depending on the precise array of spacecraft at hand, the service-module thrusters could also be used.

These carefully timed burns would maneuver the station lower at only one point in its orbit, making the re-entry more predictable and allowing managers to target the debris to the vast, sparsely populated southern Pacific Ocean. The rest is up to the destructive power of Earth’s atmosphere. The strategy, unsurprisingly, has its risks. If something knocks a burn off schedule, well, there goes the predictability.

The 2017 paper lays out options both for a scheduled deorbit and in response to a potential catastrophe on the space station. If something suddenly goes unfixably wrong on the orbiting laboratory, the organizations behind the facility will have just two weeks to decide how to proceed, the group wrote.

The International Space Station’s successor may face a much smoother retirement—although still a fiery one.

Texas-based Axiom Space is planning to launch new station modules beginning next year and, as commercial interest in accessing orbit grows and the ISS ages, eventually split off from the International Space Station to form its own freeflying orbital facility.

But Axiom has learned from the space station’s complicated fate and has already wrestled with how its facility will end. The company is planning its modules to be more truly modular than those on the space station, with the capability to easily remove and replace segments anyway, giving the company flexibility in its future.

The arrangement also means that each module can control its own fate. “Each module is going to be designed with its own guidance, navigation and control, its own thruster capabilities,” Maender said. “So they can fly essentially on their own, and then when they need to, they can separate and return through Earth’s atmosphere on their own.”

Copyright 2020 Space.com, a Future company. All rights reserved. This material may not be published, broadcast, rewritten or redistributed.